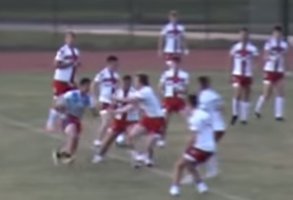 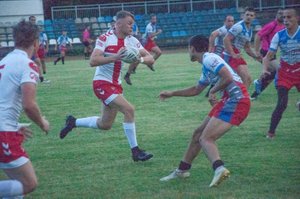 Tommy Svanidze had joined Elmbridge Eagles Under 14s casually for a season, with the idea to maintain his fitness and learn some new skills during the Rugby Union ‘Off season’. Then it became something more - he started to appreciate the intensity, speed and structure of Rugby League as well as the camaraderie at the club and thoroughly enjoyed his first season of Rugby League.

But then there was more to follow – Tommy’s mum is from Serbia and through this is qualified to represent Serbia Rugby League and was invited to participate in Serbia R.L's youth training camp during the summer. He enjoyed these three weeks immensely. There were boys from various age groups, and from across Serbia and the globe (including Australia) all wanting to represent Serbia Rugby League. The players had two Rugby League training sessions every day with an optional third session for general fitness. In the evenings the players would watch and analyse some international Rugby League games.

There were a number of social events as well - they had good times by the swimming pool, went for a hike in the mountains, tried some local cuisine.

After the camp, there was a friendly game vs a touring England Lionhearts team. It was quite a step up in standard for Tommy, but there was a lot of support from coaches and teammates. He competed well, with a few good tackles and a good run or two. The groundwork laid at Elmbridge Eagles and the Serbia R.L training camp all supported Tommy’s development and ability to compete. All these experiences have provided Tommy more confidence, and also more appreciation for the amount of work that is required to perform at the highest level to become a professional and International sportsman.