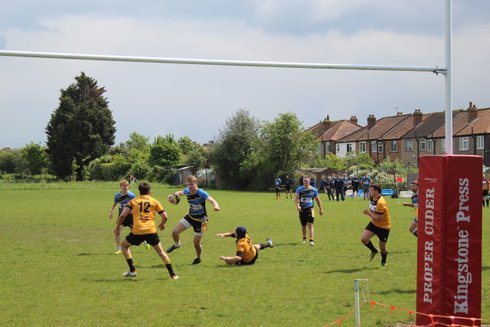 Elmbridge were defeated in their opening game of the season by a well organised Brixton ’A’ side, who were ably supported by their vocal home supporters.

Elmbridge were slow to start and ‘rusty’ at Rugby League, in their opening game of the season, which displayed itself in their poor completion rate in the tackle count, especially in the first half against a well organised Briton ‘A’ side.

In the first half, Elmbridge struggled with some of the basic disciplines around the play of the ball area, giving away too many penalties in their own half. This also resulted in a red card for their hooker, which saw Elmbridge see out nearly 60 minutes of the game with one less player.

The Elmbridge side improved as the game went on and dug in. Despite having one less player, Elmbridge created a number of scoring chances with Sonny Kelly going close for a try and being held up over the try line on a number of occasions in the 2nd half. Both Ben West on his club debut and Sean Belbin had strong performances, as they started to find their rhythm.

As the game went on, the standard of the Rugby League from both teams improved, with some well worked tries created by Brixton ‘A’ in the 2nd half.  The team knows what it has to build on and training continues as normal on Tuesday at OCs: 7-8.30pm.